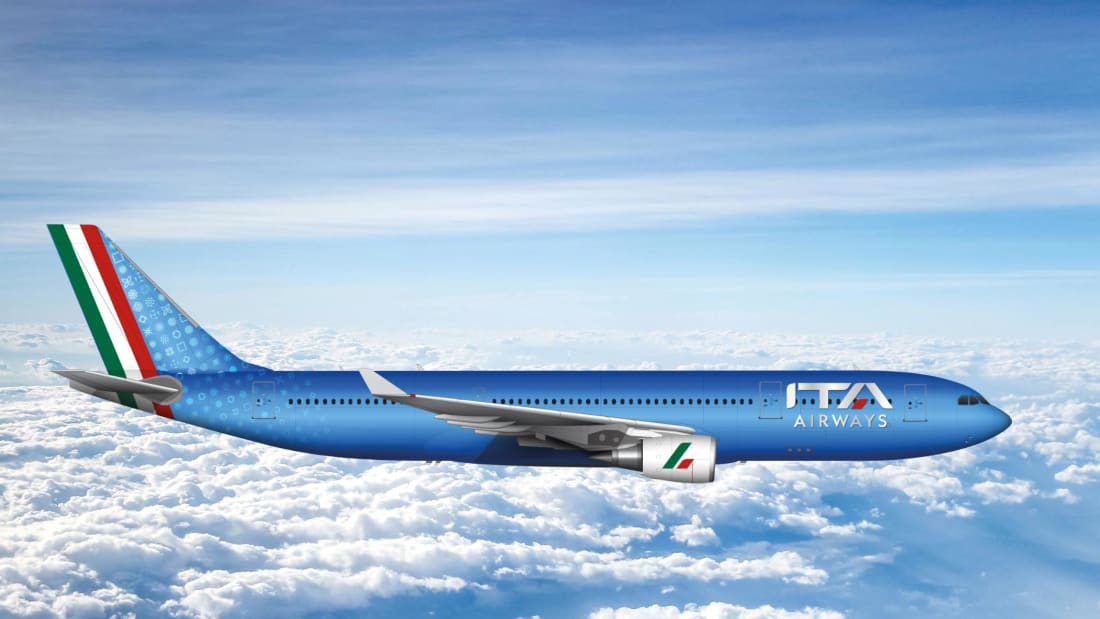 (CNN) — They’ve long dominated the food and fashion worlds, this year they’ve dominated sports, and now they’re aiming for the skies. Italy‘s new national airline, ITA Airways, launched on Friday with a promise to bring pride back to its national flag carrier, after Alitalia, Italy‘s legacy airline, went bankrupt and ceased operations a day earlier. Executives unveiled plans for the new network, airplanes, staffing and livery at a press conference livestreamed from Rome.
The first thing to know: everything will be centopercento italiano. The new ITA Airways planes will be colored sky-blue, with staff wearing uniforms by top Italian designers. Interiors and airport lounges will be dressed by high-class Italian firms, and even the cars and minibuses used to move around the grounds will be Italian. “We have been born as a new Italian brand, and we have chosen to work only with Italian companies,” said Alfredo Altavilla, president of ITA Airways.

The sky-blue livery, complete with green, red and white tricolore stripes of the Italian flag on the tail and on the engines, is a homage to the Azzurri, Italy‘s national sports teams, who wear sky blue (“azzurro”) strips during competitions.
The Azzurri have, of course, done phenomenally well this year, with the soccer team winning the UEFA European championships and 40 medals at the Tokyo Summer Olympics. Italian Matteo Berrettini was the runner up in the Wimbledon tennis final.
That, according to Altavilla, is the positive energy ITA wants to bring to the skies after the failure of Alitalia. “Today is the first day of a history that has yet to be written,” he said. “The new branding and the new livery of our planes are a symbol of that change, of the start of a new adventure.”
In response to CNN’s question about staff uniforms, Chief Marketing Officer Giovanni Perosino said that although nothing has been announced yet, the airline is in talks with “a very important Italian brand” about the possibility of designing them.
“We want to give our clients an Italian experience, and when you think of contemporary Italy, it’s rich and complex,” he said. “So our dream is to partner with companies from various disciplines, from the food to the styling of the aircraft, to the uniforms to the furniture in the lounges. Our vision is to use globally important Italian brands. It’s our wish, but we’re already talking with big brands.”
In the meantime, they will keep using the Alitalia uniforms and livery, although they expect the planes to start being repainted within the first few months. The decision is partly to save money, he said. 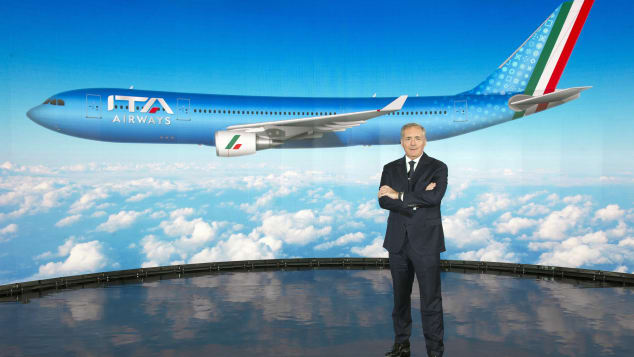 Alfredo Altavilla, president of ITA Airways, at the airline launch.
Handout/ITA Airways
The news that the company would keep its original name of ITA Airways surprised many who assumed it would want to keep the Alitalia brand going. In documents filed to the US Department of Transport to request permission to fly there, it admitted plans to acquire the Alitalia brand name.
And the night before the airline launch, it was announced that it had bought the Alitalia name for €90 million ($104 million), leading many to speculate that the new airline would, essentially, be the old one.
However, Altavilla said there had never been any question of branding the airline as Alitalia.
“In my head it’s always been ITA Airways,” he said.
“But we were always very clear not just that we wanted to buy the Alitalia brand, but that we needed to. Not least for marketing reasons — the Italian brand couldn’t belong to anyone else except the national flag carrier.”

Alitalia was drowning in debt for years before the pandemic, but Altavilla said that the future is bright for ITA, calling the airline “right-sized” both in terms of fleet, staffing and routing. It’s plan is to operate a fleet of new Airbuses, which are both more efficient and less damaging to the environment.
The first new jets will enter the fleet in early 2022, and by late 2025, it says that 70% of the fleet will be new-generation aircraft. It plans to start with 52, and increase to 105 by 2025.

This author does not have any more posts.