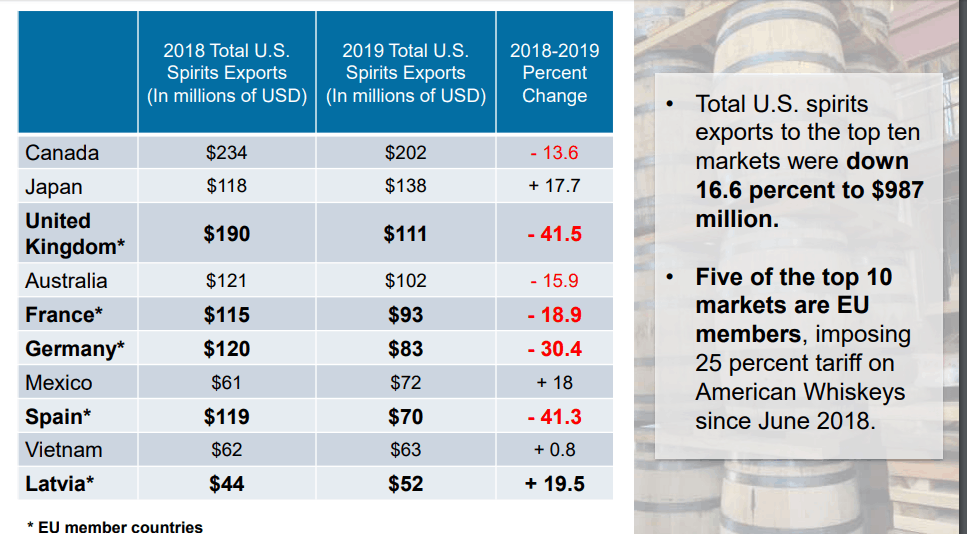 The Distilled Spirits Council of the United States (DISCUS) warned on Wednesday during its annual economic briefing in New York that a decade of expanding American whiskey exports is about to be bottled up by an ongoing U.S. trade war with the European Union.

“The data is clear. These tariffs are chipping away at American whiskey’s brand equity in our top export markets,” said Council President and CEO Chris Swonger.

The EU has been a longtime growing market for American whiskeys, but exports during the past two years have fallen due to the implementation of EU retaliatory import tariffs.

According to DISCUS, American distillers have so far made up for the loss in exports through domestic sales, which in 2019 increased 5.3%, or $1.5 billion, for a record of $29 billion. This marks the 10th year of domestic market gains for spirits.

“We are now gravely concerned that the U.S. tariffs on EU spirits imports will have the same deleterious effect in the United States,” Swonger said. “If this trade dispute is not resolved soon, we will more than likely be reporting a similar drag on the U.S. spirits sector, jeopardizing American jobs and our record of solid growth in the U.S. market.”

DISCUS highlighted data released this week by the U.S. International Trade Commission (ITC) showing that the impact of the EU’s 25% tariff on American whiskey has caused U.S. exports to this market to drop by 27% last year compared to 2018. Globally, American whiskey exports have decreased 16%, while global spirits exports are down 14.3% over the same period.

Christine LoCascio, the council’s public policy chief, said the recent passage of the United States-Mexico-Canada Agreement, as well as the Phase One trade deal reached between the U.S. and China and negotiations with Japan, are positive developments for the American whiskey trade.

“We are hopeful that the recent trade agreements will create new momentum for negotiations with the EU that will result in the immediate removal of retaliatory tariffs on American spirits exports and U.S. tariffs on certain EU spirits,” she said.