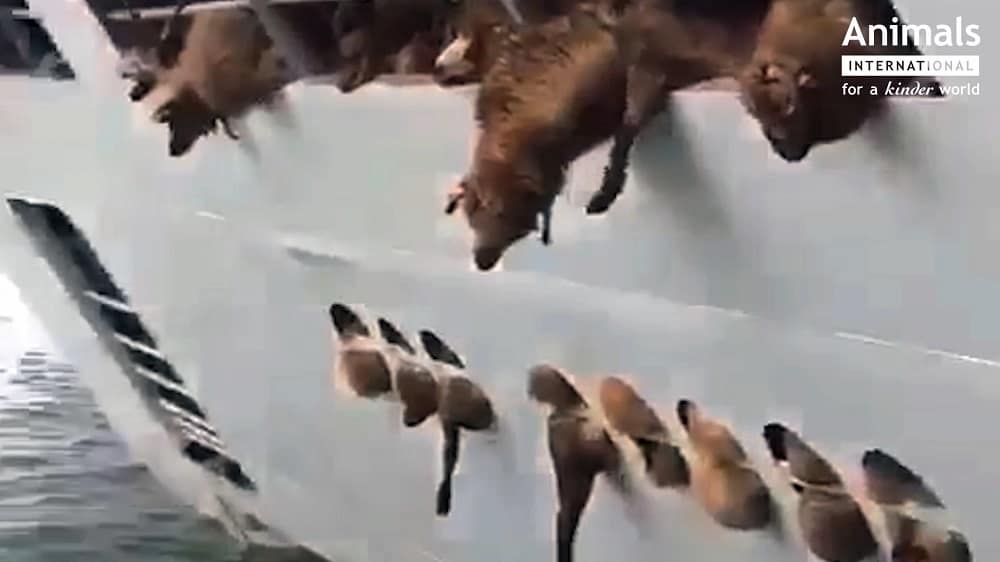 Over 14,000 sheep have died after a ship carrying the animals capsized off the coast of Romania.

The vessel, the Queen Hind, overturned Sunday, November 24 in the Black Sea shortly after loading the sheep at Midia port.

The Saudi Arabian port of Jeddah was one of the vessel’s reported destinations.

The causes of the capsizing are unknown but local media reports claim the vessel may have been overloaded.

Romanian police, military and divers desperately attempted to right the vessel and tow it to port in a bid to save the trapped animals Sunday and Monday.

However, while the crew of 20 Syrians and one Lebanese were safely rescued, only 33 sheep out of 14,600 are thought to have survived.

Animal welfare activists call livestock vessels such as the Queen Hind “death ships,” claiming animals are treated appallingly during loading and at sea, and are effectively cooked to death on board during the hot summer months.

Eurogroup for Animals is now urging the European Union to take legal action against Romania, the EU’s third-largest sheep breeder after Britain and Spain.

It claims the 1980-built 3,786 gross ton Queen Hind was approved in March by the Romanian National Veterinary and Food Authority to travel with the live animals “despite being outdated, not built for live transport, and encountering engine problems as recently as last year.”

“Infringement proceedings are needed to ensure a proper application on the EU law on transport and the effective protection of the animals,” said Reineke Hameleers, Director of Eurogroup for Animals.

“It is high time the Commission intervened, both by tackling maladministration by Romania and, for the longer term, puts forward a concrete strategy to replace live transport with a meat- and carcasses-only trade.”

Animals International’s director in the EU, Gabriel Paun, said tragedies like the Queen Hind would continue to occur regardless of improvements and better law enforcement. “There is just one way to end this risky, unnecessary and barbaric trade: replace live export with the trade in meat and carcasses,” he added.

Romania’s main livestock breeder and exporter association, Acebop, has promised to urgently investigate what happened to the Queen Hind.

“Our association is shocked by the disaster,” Acebop president, Mary Pana, told AFP. “If we cannot protect livestock during long-distance transports, we should outright ban them.”

Romania’s exports of sheep to the Middle East were widely criticized this summer for being unnecessarily cruel.

In July, Vytenis Andriukaitis, who was then the European commissioner in charge of health and food safety, demanded the EU Member State block the shipment of 70,000 sheep to the Middle East on animal welfare grounds citing extreme temperatures during summer in the Black Sea region.

His calls went unheeded and the shipment proceeded.

In evidence given to the EU Commission in August, Animals International said as a result of the shipment hundreds of sheep had died by the time they reached their destinations, with an investigator describing “piles of dead sheep” at one unloading point in the Gulf.

“They also saw surviving sheep being ‘beaten’ as they disembarked in temperatures of over 40°C,” reported the activist group.

“While the initial destination was Kuwait, the vessel made five stops in the Gulf, increasing the risks of suffering and death from heat stress.