Commentary: Trade flow and the warning flares it signals – FreightWaves 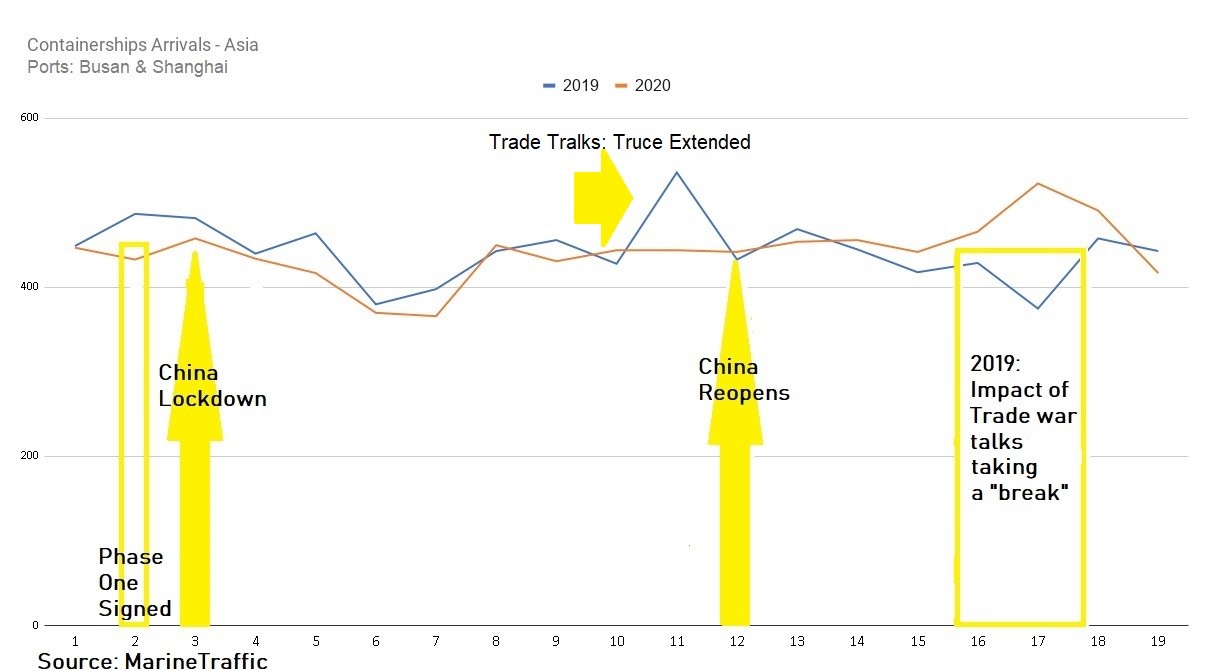 Commentary: Trade flow and the warning flares it signals – FreightWaves

The U.S. trade war with China and COVID-19 have reshaped the flow of supply and demand. While the trade war shifted the movement and volume of goods, the coronavirus has impacted the buying behavior of consumers. Now with the world in various stages of reopening, the big question that remains is will the consumer come roaring back?

One way to track this trend is by analyzing the volumes of containers. With a lead time of several months, retailers and manufacturers fill orders based on expected future demand. MarineTraffic supplied this exclusive data on the containership arrivals from Asia, North America and Europe. Since China was the first country to shut down and reopen, looking at the world’s largest consumer and manufacturing hub would provide some unique insight into this new pandemic normal.

Key points in the trade war as well as COVID-19 are marked to show how the flow of trade proves the intent of the Chinese government as well as the health of the Chinese consumer. Based on the containers, you can plot the progress or setback of trade talks, Phase One obligations and consumer buying.

The pop in the flow of the containers into China was the result of COVID-19 infecting the country during its Lunar New Year celebrations. The lackluster return of the Chinese consumer can be seen in the drop of containers. Consumer buying is something the Chinese government cannot control, but it can regulate the trade of grains, ore and energy.

Based on the imports of soybeans from China, the Phase One trade deal had no impact on the Chinese government’s buying behavior. In fact, China was more bullish in purchasing Brazilian soybeans than buying from the United States. These are delivered soybeans, not unshipped commitment orders. Those types of orders are the equivalent of promising to start a diet. You can always kick the can and start another day. Unshipped commitment orders can be cancelled or pushed to another time. The delivered shipments below show intent.

“The estimated amount of Brazilian soybeans exported to China in 2017 was 53 million tons,” explained Jesper Buhl, of BullPositions. “The combined Brazilian exports in 2018 and 2019 were 120 million tons. This strongly indicates China has turned to Brazil during the trade war period.”

UNCS, a supplier of products for Macy’s, Ross, 5 Below, TJ Maxx, Kroger, Stop & Shop and Amazon third-party sellers, is a great example of the pulse of the consumer. Based on orders, Rose said retailers have pivoted to accommodate both the needs of their customers and retail staff. “We have seen a massive increase in the number of orders for masks, thermometers and hand sanitizer. It’s the new norm for PPE,” Rose explained. “We are about 75% PPE and 25%  ‘regular’ goods.”

The large retailers are not the only companies changing. According to Freightos.com, small and medium-size businesses, especially e-commerce sellers, are filling the void left by the shuttered brick and mortar retailers. Imports over the last four weeks are up by 14% compared to 2019.

“While PPE played a role, it’s certainly not the only factor,” said Judah Levine, Freightos Group Research Lead. “Though 7% of shipments were PPE-related, other well-represented segments included sporting goods (11%) and housewares (26%). Year-over-year, U.S. East Coast and West Coast rates to China are 38% and 25% below last year’s prices, respectively, reflecting the low capacity and high rates that followed the peak pre-tariff pre-ordering early in the U.S.-China trade war.”

Adil Ashiq of MarineTraffic warns the trade trends we are seeing now could be a sign of things to come. “U.S. trade through the first three months of 2020 fell 4.16%, though an increase of nearly 25% was witnessed in imports of medications compared with the same time period last year. We may see a decline in arrivals to the West Coast as of Week 17, 2020 onward, due to current U.S.-China trade talks.”

For a more pure-play look at the impact of COVID-19 on the flow of trade, you can turn to the European Union (EU). With no major trade wars impacting the region, you can see the same trade pattern, albeit at lower volumes. “Although many EU countries didn’t begin implementing stay-at-home orders until mid-February, concerns began several weeks before and the impact was soon realized by Week 10 of 2020,” said Ashiq. “Vessels continued calling into EU ports as the virus’ spread wasn’t as significant compared to the U.S. EU nations such as Germany and Italy recently reopened and are preparing for summer tourism; thus we are seeing a slight uptick of port calls, coinciding with port calls in the same timeframe of 2019.”

In the end, the lower volumes will impact the profits of those in logistics and management. As the world races for a cure and therapeutics, the world’s recovery depends on the confidence of a shaken consumer.